Did you know there is a cheaper way to address the climate and energy security crises than electrification?

It may come as a surprise that solar thermal can be cheaper than electrification. Nevertheless, millions of Europeans already benefit from competitive solar thermal solutions. For instance, a small, low-cost thermosiphon system (2.8 kWth) with diurnal thermal storage (12.7 kWhth), can supply domestic hot water in a Mediterranean country to a family of four for less than 2 €-cents per kWh. On the other hand, a large solar district heating system (35 MWth) with seasonal thermal storage (142 MWhth) in Denmark achieves remarkable generation costs of only 3.5 €-cents per kWh. And in both examples, the costs include also energy storage, which is always an integral part of a solar thermal system.

Can Europe’s energy security be compatible with our climate goals?

Yes, it can! If we decarbonise heat! Renewable heat is generated locally, avoiding CO2 emissions and avoiding spending billions on imported fossil fuels, rather channeling investments to local manufacturing and installations, creating new jobs. In addition, renewable heat solutions, such as solar thermal, can be quickly deployed in different segments, such as buildings, districts, and industry. A supplementary advantage, essential for energy security, is that solar heating systems are manufactured in Europe, using mostly a European-based supply chain for its components, while having several supply options outside Europe, if need be.

Find out more in the Solar Thermal Roadmap.

The solar thermal roadmap was officially launched during the

Heat represents half of the energy consumption in Europe and its decarbonisation plays a strategic role in the response to the two major crises Europe is facing: climate change and energy security. In this regard, Solar Heat Europe organised a High-Level event, dedicated to the topic ‘Heat decarbonisation: a strategic imperative for the EU’. The event gathered different stakeholders, ranging from policymakers to representatives of different industrial sectors.

The event provided a unique space to discuss the intersection between the recently launched REPowerEU plan, the EU Solar Energy Strategy and the ongoing discussions on the Renewable Energy Directive, as well as the need for a swift implementation across the EU when it comes to the decarbonisation of heat.

The solar thermal actors supporting this roadmap commit to produce and install the full solar heat capacity projected by the IEA and IRENA for 2050, by 2035. This would replace over 400 TWh of fossil fuels in Europe, which is close to the full amount of fossil gas produced in the European Union annually.

Reaching over 400 TWh of direct heat by 2035 years will require the full mobilisation of our sector, as well as the full-hearted support of EU institutions, Member States and the private sector. However, the European Solar Heat Industry is ready to take this challenge and enable a rapid deployment that can be 100% European made.

Heat represents 50% of the final energy consumption, while electricity is only 20% and transport is 30%. With all this, the power sector and renewable electricity solutions receive more support and better conditions for deployment, while renewable heating solutions struggle to achieve their real potential because of the lack of awareness and efforts for heat decarbonisation. Compared with solar photovoltaic, solar heat has:
3 times higher efficiency with collectors reaching an efficiency of 70 – 80%
3 times less space needed for rooftops and on-ground installations
3+ times cheaper energy storage, often integrated in the system 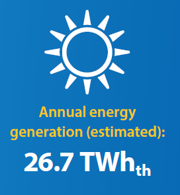 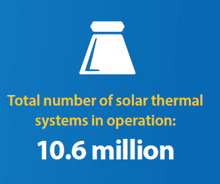 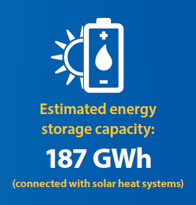 A large share of the world’s industries that use low and medium temperatures in their processes are based in Europe. Many of these are multinational companies that have committed to quickly reducing CO2 emissions and are installing large solar heat systems to achieve their objectives. IEA expects solar heat to cover 11% of the industrial heat demand in 2050 at global level.

In every town in Europe, there are solar heat installers and in every country there are manufacturers. 10 million houses already have solar thermal systems installed. Adopting best practices from Cyprus and Germany, domestic hot water and part of the heating can come from solar thermal. IEA expects 1,2 billion homes globally to have installed solar heat in 2050 compared to 0,25 billion houses with photovoltaic.

Over 6000 cities in Europe burn fuel or waste to provide heat to their citizens. Only 200 cities use solar heat in their district heating today. In many district heat networks, solar heat backed by seasonal storage can supply close to 100% of the energy. To cover such heat demand, on average, a ground space approximately equal to local golf courses is needed.

The solar thermal sector has already integrated 180 GWh of energy storage in the European energy system, 20 times more than all the grid-connected batteries for electricity. Combining energy-saving when doing the solar installation with smart utilisation of the thermal storage will save 90 TWh. Seasonal heat storages used in Denmark have proven to be 200 times cheaper than the cheapest battery technology.

Southern European countries must adopt solar heat best practices from Cyprus which has on average 1 square meter of solar collector installed per capita.

The country in Europe with the second highest share of solar thermal is Austria, showing that this technology is fit for colder climates. Other colder countries such as Germany, show how single houses and apartment buildings should be using solar heat.

For industry, many multinational companies in Europe are now installing solar heat to replace gas, learn from them!

If it is cheaper than gas, why not go for it?

The deployment of solar heat has faced different barriers, leading to energy users not opting for solar thermal even if it would be profitable. If only profitable investments were implemented without delay, the goals of the pledge would easily be fulfilled. For cities and for industries, issues such as permitting, financing, procurement, and local planning must be addressed in order to facilitate and speed up the deployment of solutions such as solar heat, that are, strategic decisions to end the dependence on fossil fuels.

What will it cost is the wrong question!

Let’s say instead: how much will we make?

Assuming average gas price the past 3 years, 100 Euro/ton CO2, and 2% inflation, the investment of 200 billion Euro will create proceeds of over 500 billion Euro. Low, predictable energy costs will benefit European industry and reduce costs for citizens, taxpayers, and consumers.

How much will the price drop when the market grows?

IRENA has found that the price drop of solar heat due to the learning curve as the installed base increases is substantial. For Solar District Heating in Denmark, the learning rate resulted in a price drop of 18% for each doubling of the installed base. Such an impressive learning rate surpasses those of both photovoltaic and offshore wind. In addition, as solar heat volumes are still modest, prices will decrease year on year as volumes grow.

Our 2020 pledge to deliver a Green Recovery